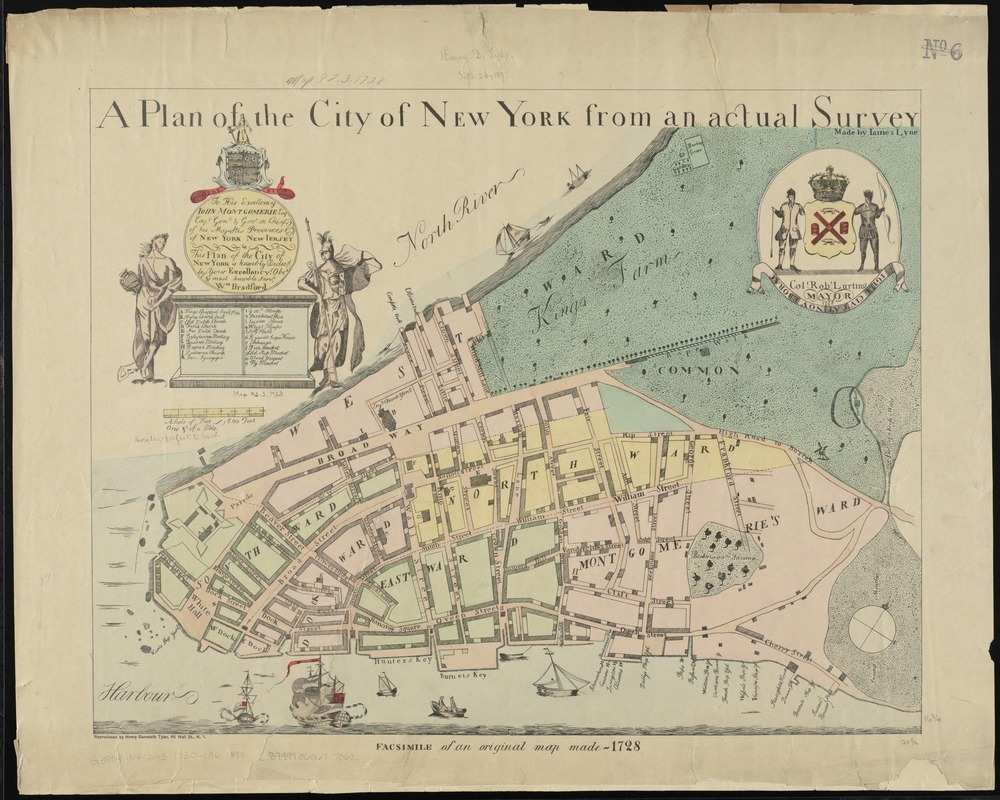 The Bradford Plan, an early survey map, depicting part of the British colony in 1730.

The two maps highlighted here are depictions of the growth of the New York landscape and geography as an English colony from the Dutch colony of New Amsterdam. By clicking this Bradford Plan, you can zoom into the map and see familiar street names such as Wall Street and Broadway and also notice other street names from the Dutch period have been changed to British-period names. 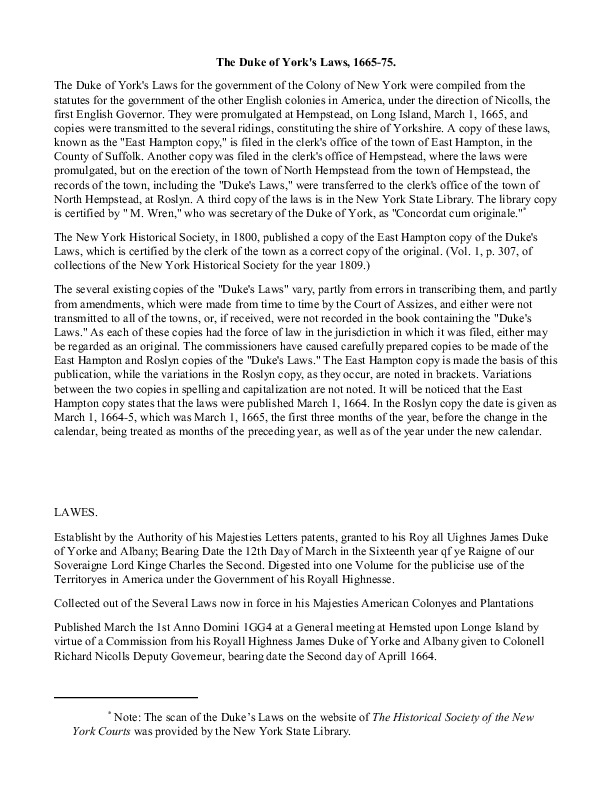 First published alphabetically, the laws covered every aspect of English colonial life including the restrictions against the black population highlighted in the sections "Assaults", "Bond Slavery", "Fugitives", "Indians", "Marriages", "Masters, Servants, and Laborers," and "Votes."

Since the start of English control in 1664, there was an increase of the Black population in New York that was lent mainly to the growth of New York's involvement with the slave trade in comparison to the Dutch. And a majority of the people were enslaved in New York households. There was a strong fear brewing within the white colonists because of this increased black population under British rule, so throughout New York's British-controlled period starting at 1664, colonial elites started to place restrictions on the activities and movements of the colony's black denizens.

Within the Duke of York's Laws from 1665-75, there is the first English rule restricting the activities and movements of the black population, no Christian can be held in slavery. This negated the stance that Dutch church, now known as, the Collegiate Reformed Protestant Dutch Church, took in the earlier Dutch period by allowing enslaved people to convert to Christianity. This opens the door for municipal legislation to start legally separating the black population further from the white colonists of New York and treating them as the less than on a basis of immorality, a label that has been attached to blackness in the colony, which only expanded after the 1712 revolt and then further after the 1741 conspiracy plot. 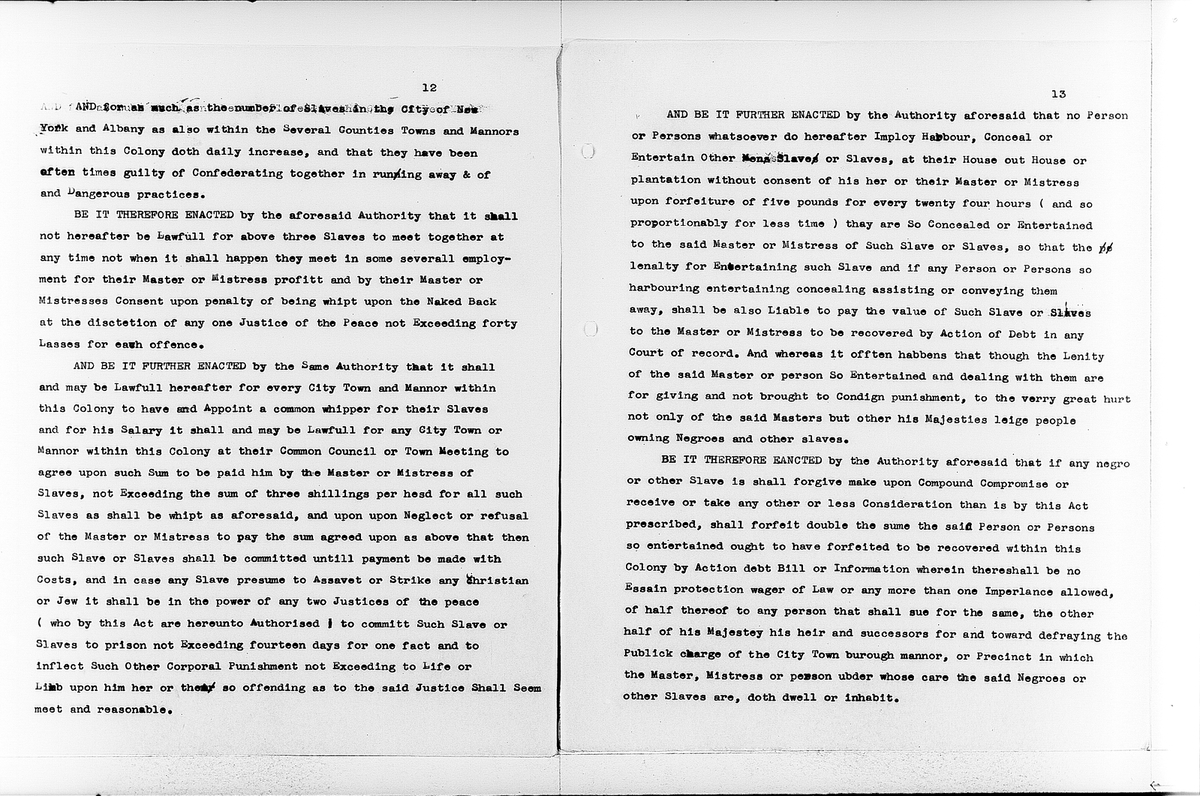 Page 7 of municipal laws restricting Black movement and activities in the colony. 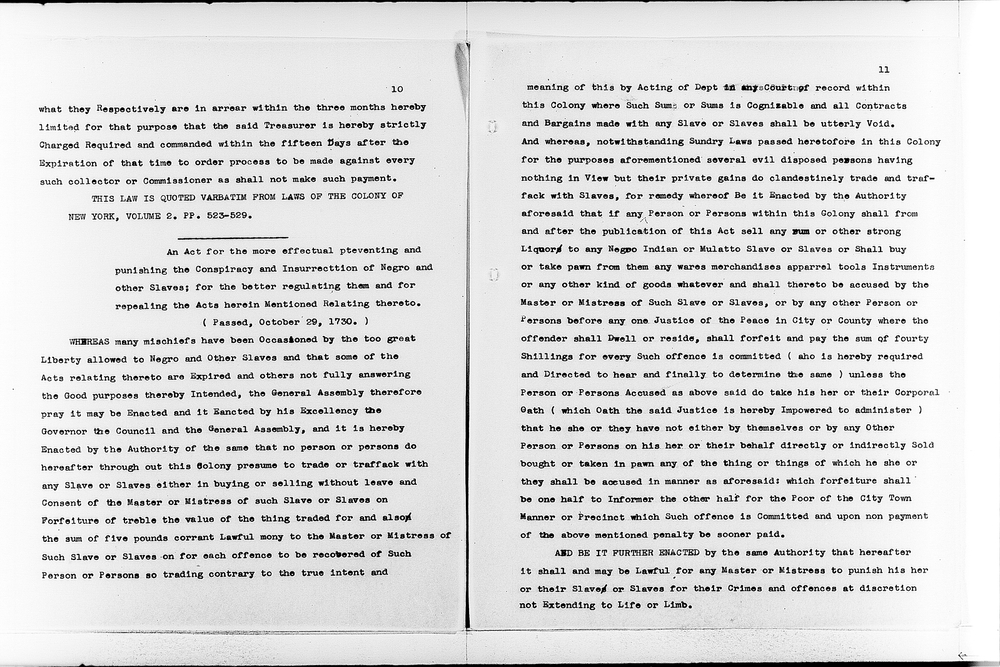 Page 6 of municipal laws restricting Black movement and activities in the colony.

The documents above are parts of a series of municipal laws that severly limit New York's black population in the 18th century. The documents included laws that made it illegal for anyone in the colony to trade or traffic any ecoonomic commerce with enslaved people without the consent of their slave holders. Or sell strong liquor to "any Negro Indian, Mulatto Slave, or Slaves" with the fear paying the fine of forty shillings (Part 1, page 6).

Another law was made for it to be lawful for every city town and manor in the whole colony to have a common whipper with a designated salary in order to punish the enslaved people in every lawful subsect of the colony. This highlights the British establishing a widespread order and oppression against any enslaved person, which I read with the implication of most of the enslaved people in the colony in the early 1700s were black (Part 2, page 7). 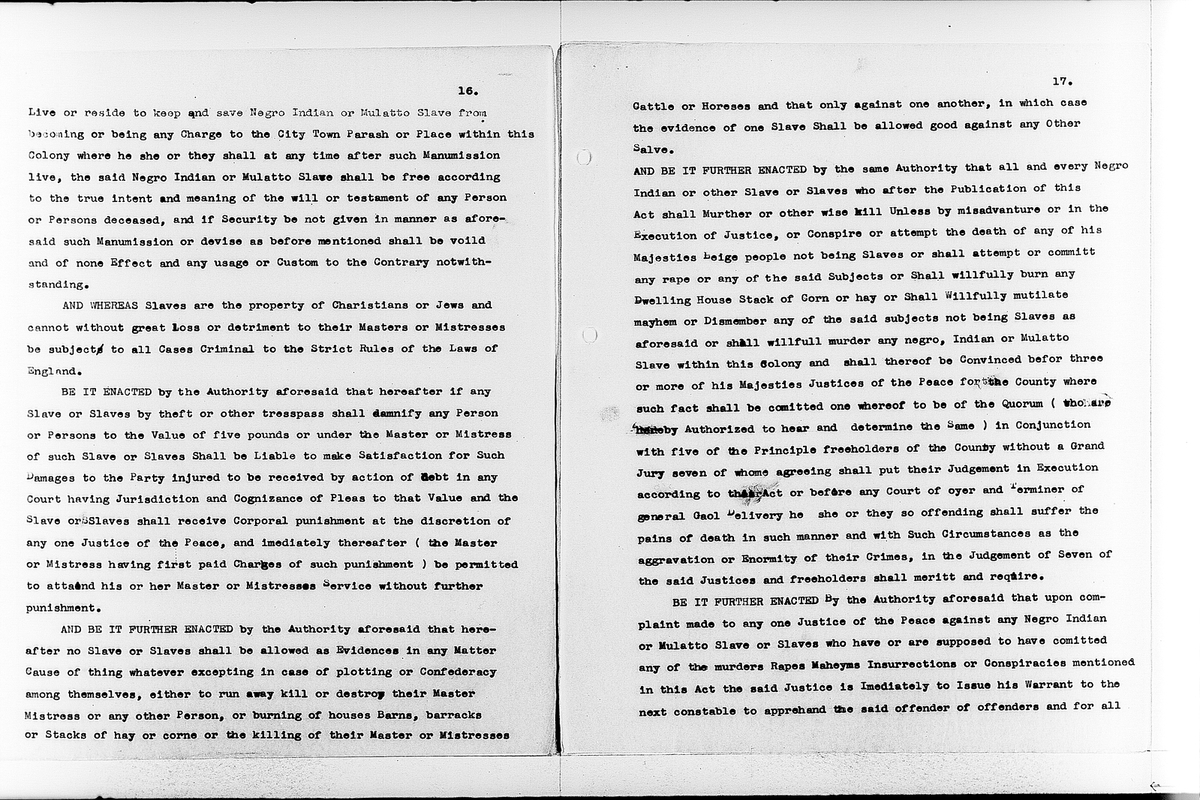 Page 9 of municipal laws restricting Black movement and activities in the colony. 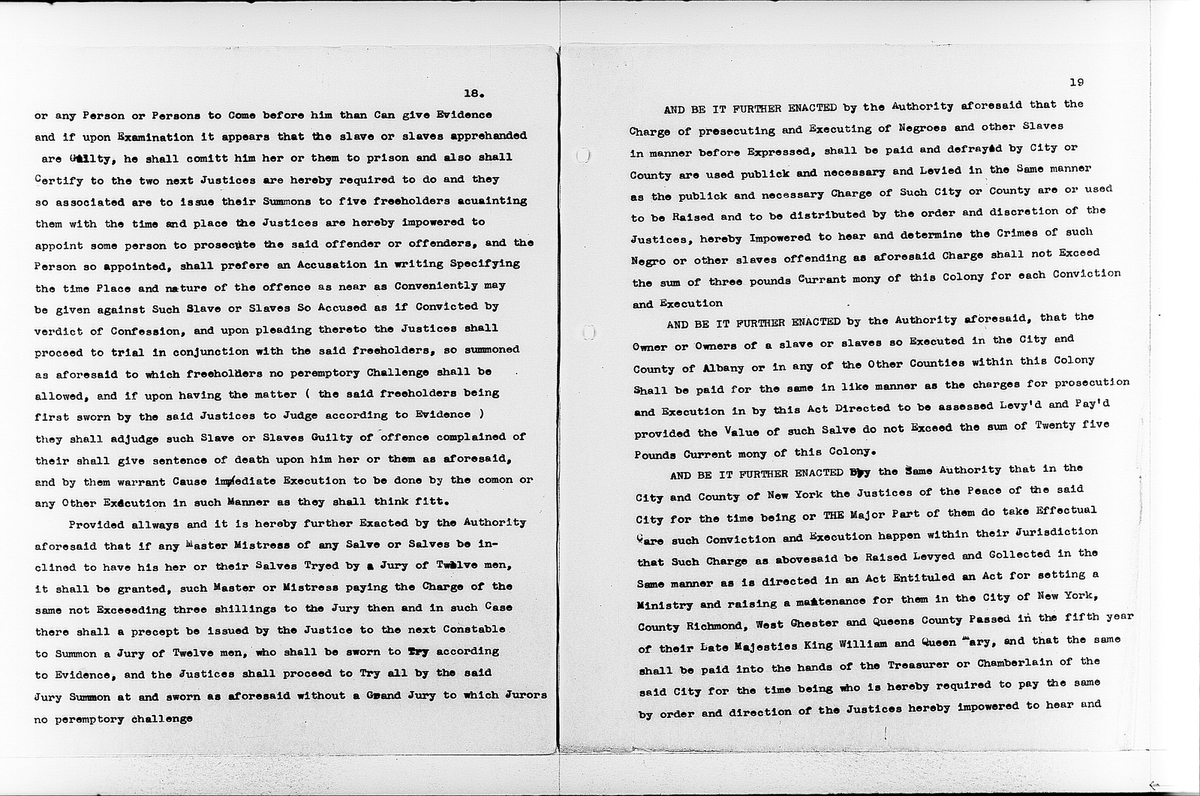 Page 10 of municipal laws restricting Black movement and activities in the colony.

By addressing the fear of a black uprisings against the order set by white colonists under English rule, a law was made that in the case of any complaint brought to the "Justice of the Peace against any Negro Indian or Mulatto Slave or Slaves who are or are supposed to have committed any of the murders, rapes, mayhems, insurrections, and conspiracies" that have been addressed in the law, the Justice is to immediately issue a warrant of arrest for the accused and will be sent to prison and prosecuted (Part 2, pages 9-10).

In the last quote above, I believe the specific description of "Negro Indian" "Mulatto Slave" and "Slaves" highlight who was considered the "other" against the white colonist in early 18th century British-controlled New York. At this moment of time with the increasingly shrinking presence of indigenous peoples along with increased numbers of enslaved black people coming from the African continent, including the Caribbean, and Latin America created more diversity in the othered population, and shaped a new identity of blackness in New York. The highlighted labels references to the cultural and racial groups in the colony that are not white, and therefore susceptible to legal discriminatory practices.