The 1712 revolt was the first reported uprising of enslaved people in New York during its colonial period under British rule. On the night of April 6, 1712, a group of more than twenty enslaved people, armed with guns, hatchets, swords, and other weapons gathered together and set fire to a building in what is now the Financial District of downtown Manhattan. As the fire spread, white colonists gathered to put out the fire, leaving them open to attacks from the enslaved people. During the struggle, at least nine white colonists were killed and at least six were injured. The enslaved group fled the scene, some ran north of the colony and hid in the surrounding swamps and wilderness of the, at the time, undeveloped Manhattan island, but all who were involved in the revolt were captured. Afterwards, white colonists arrested and jailed about seventy black people in the colony on the basis of suspicion. It is reported that all of the enslaved people were put to trial and found guilty, convicting them to execution. Six committed suicide while the other twenty-one were hung, burned alive, or tortured to death by various methods. 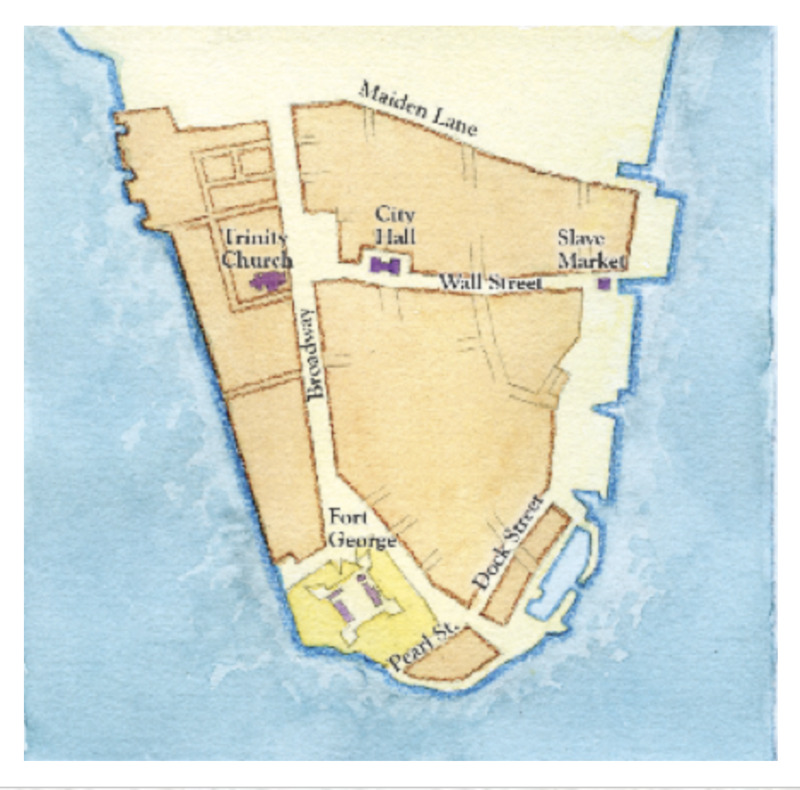 Map of the colony of New York in 1712 during the time of the slave revolt.

The featured map is to give more sense of the geography of the British colony. Highlighting how the slave market was located at the foot of Wall Street, an economically prosperous and merchant gathering spot of the geographic area since the Dutch period and which is now considered as part of the Financial District in Lower Manhattan, could imply New York's economic dependency on access to the African Slave Trade. Plus, the placement of City Hall further up Wall Street and Trinity Church being on the opposite end of Wall Street insinuates a neutral stance, at the very least, or ardent approval, at the most, of the economic gain of the slave trade from the colony's religious and legal institutions. 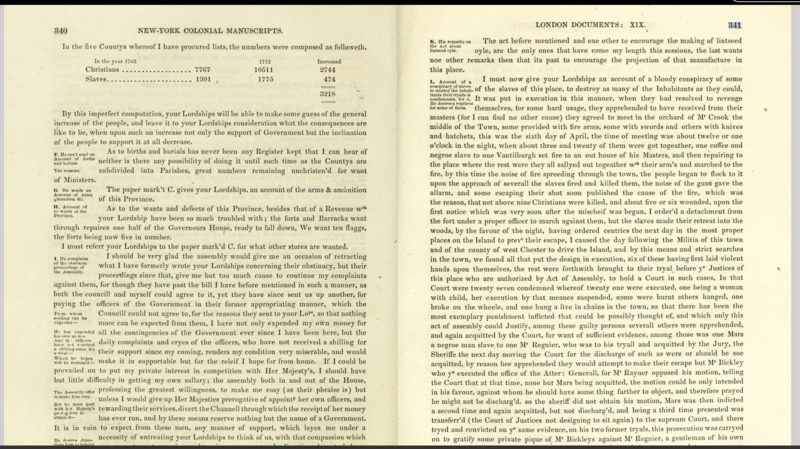 This letter written by the Colonial Governor Robert Hunter (1710-1720) was sent to British officials reporting the increase in the colony's population and a plead for further economic support. On page 341, starting at the second paragraph, Hunter writes about the "...bloody conspiracy of some of the slaves of this place, to destroy as many inhabitants as they could..." Hunter breifly describes what buildings were set fire, how many Chiristians were killed, where the Black fugitives have escaped to, and the subsequent capture and punishments for those fugitives and accused accomplices.

Mat Johnson's fictional account of the night of the 1712 revolt through the perspective of the Black fugitives.

Although the governor Robert Hunter's letter was the only written primary source found that directly addressed the events of the 1712 revolt, Mat Johnson's fictionally recount of the event through the perspective of the Black Fugitives brings life to a missing side of the narrative. Johnson's narrative is fictional but it captures the emotions that the fugitives may have felt in the revolt's immediate aftermath as well as the setting of the wooded and swamp areas on the outskirts of the colony. This fictional account is included in the narrative of the 1712 revolt in order to bring a perspective of humanity towards an event has been historically told through the clinical words of the oppressing, governing body of the 1712 New York colony.